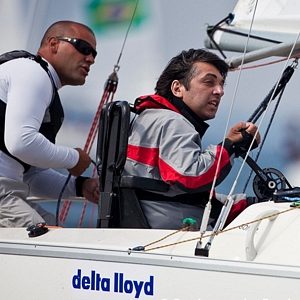 Vassilis Christoforou was born in Athens on February 7, 1975 and he has been involved in the sport of sailing from an early age in the Optimist, Laser Radial, Laser, 470 and J/24 classes. He had many successes in regatta and participations in National Teams and until 1999 he also competed in several offshore competitions as a captain but also as a crew with several distinctions. At the same time, having graduated from University of Physical Education and Sport Science of Athens, he worked as a sailing coach of schools and racing teams in the Nautical Clubs: Paleo Faliro, Porto Rafti and Vouliagmeni.
1999 is the year that will determine the rest of his life. In National Optimist Championship that participates as a coach of N.C. Vouliagmenis suffers a neck injury during a diving accident.
In 2003 he returns to sailing in the Paralympic class 2.4mR, and participates in 2003 IFDS World Championship in Piraeus. Since then, as a member of the National disabled sailing team, he has given our country very important victories. He has participated in many International Regattas and IFDS Sonar World Championships as well as the Paralympic Games: Athens 2004, Beijing 2008, London 2012 and Rio 2016.
Today he is a member of the Disabled Committee of Hellenic Sailing Federation (H.S.F.).