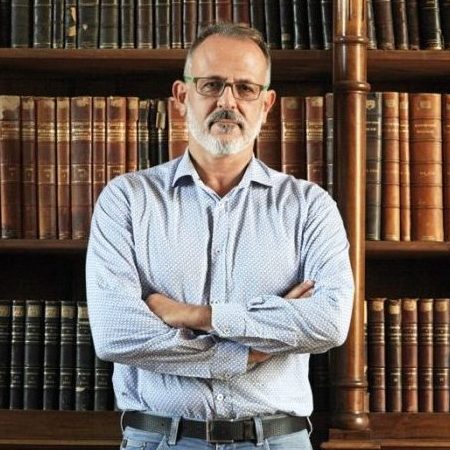 Professor of Department of Physics at Aristotle University of Thessaloniki, Director and Chairman of the Board of the National Observatory of Athens

Professor Emmanuel Plionis, born in 1960 in Athens, Greece, received his B.Sc. in Mathematics from the University of Crete and his Ph.D. in Observational Cosmology in 1989 from the University of Sussex, England, under the supervision of Professor John D. Barrow.
He is Professor at the Department of Physics of the Aristotle University of Thessaloniki, Director and Chairman of the Board of the National Observatory of Athens, member of the Board of the Science Dissemination Centre & Technology Museum NOESIS, member of the National Astronomical Committee and the European Space Science Committee. In addition, he is also Coordinator of the National Network on Climate Change – CLIMPACT and Chairman of the Interim Steering Committee of the Earth and Climate Change Observatory in Antikythera. He is President of the Sectoral Scientific Council (SSC) “Environment, Energy and Sustainable Development” and was a member of the SSC Physics in 2017-2019. He is a member of the Scientific Committee and the Steering Committee of the international scientific Consortium “The Ultimate XMM Extragalactic X-ray Survey (XXL)”.
He has published more than 220 scientific articles on Observational Cosmology, Large Scale Structure of the Universe and Extragalactic Astrophysics, as well as many articles on popularization and science policy, and has supervised several PhD and Master’s theses and is a reviewer of scientific articles in the international scientific journals MNRAS, Astrophysical Journal, Astronomy & Astrophysics, etc. Recent scientific interests extend to issues of Climate Change and related natural disasters.