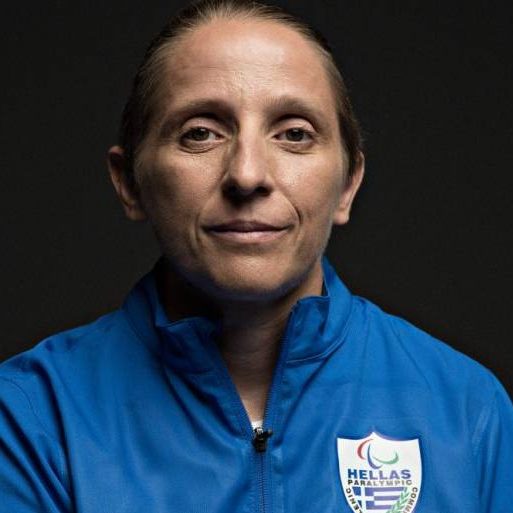 Dimitra Korokida is a disabled athlete who is involved in Para Badminton at a championship level. In 2005 a car accident caused her a serious injury to her spinal cord, leaving her paraplegic. Prior to the accident she was an athlete of TAE KWON DO and other three Korean martial arts with many participations and distinctions in European and international championships. For seven consecutive years (1999-2005), she even became the Greek Champion in Poomsae, i.e. the technical part of TAE KWON DO.
The greatest distinctions she has achieved since 2010 in Paralympic sports and specifically in athletics are:
a) winning the silver medal at the 2013 World Championships in Athletics for Disabled Athletes in Lyon in the javelin throw with a performance that was a European record in her category,
b) winning the gold medal at the 2015 World Championships in Athletics for Disabled Athletes in Doha in shot put in 2015,
(c) winning the silver medal in shot put and the bronze medal in javelin at the 2016 European Athletics Championships for Disabled Athletes in Grosseto; and
d) winning the bronze medal at the 2016 Paralympic Games in Rio de Janeiro in shot put.
In 2015 and 2016 she was named “Best Athlete with Disabilities” in the vote of the Panhellenic Sports Journalists Association (PSAT) and was awarded by the Association of Friends of Classical Athletics as “Best Athlete with Disabilities in Athletics”.
Since 2017, when she started playing Para Badminton, she has participated in many international competitions abroad, representing our country in the 2018 European Championships in France and in the 2019 World Championships in Switzerland, where she was the first Greek participation in such an important event for Para Badminton.
Dimitra, apart from being a great athlete, is an active person with many interests and a strong sense of social contribution and solidarity. She is the founder and coach of the Martial Arts School SATZA in Halandri, Attica, a scout in the 1st System of Scouts of Penteli and Ambassador of the Road Safety Institute “Panos Mylonas”.